How a TRO Bid in a NY Noncompete Case Failed - Miserably 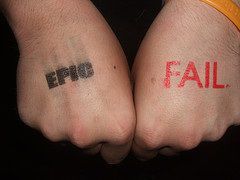 It's rare that you see a such a detailed opinion from a trial court as to why it is refusing to grant injunctive relief; more often than not, the Court will either simply decline to sign the plaintiff's proposed order.

But every once in a while a judge will issue a detailed opinion as to why they are denying the requested relief. And that is precisely what happened in an opinion from Suffolk County Justice Thomas Whelan in DK Fabrications, Ltd. v. Blaszcynski & Countertop Design, LLC.

In this case, the plaintiff contended that the Court should issue a Temporary Restraining Order against the defendant, its former production manager and general manager, because he supposedly poached three (3) customers upon leaving their employ, and therefore, the plaintiff asked the Court to issue an Order barring this former employee from soliciting, contracting or otherwise doing business with these customers and accounts (in legalese, "granting an injunction"), and to award them damages for this former employee's theft of the plaintiff's proprietary information - which, of course, violated the defendant's fiduciary duty of loyalty to the plaintiff.

The Court denied plaintiff's application; and, in reviewing this opinion, it wasn't even close.

Here are some choice snippets from the Court's opinion:

"Here, there has been no showing of any of the elements necessary for the granting of preliminary injunctive relief pursuant to CPLR 6301 enjoining and restraining the defendants from soliciting, contacting or otherwise doing business with the customers and accounts of the plaintiff ... [The record] is devoid of any evidence that during the course of his employment with the plaintiff, defendant Blaszczynski, used the plaintiff's time, facilities or proprietary information while forming his new company. There is no evidence that defendant Blaszczynski took, stole, or converted any documents, files or other business records of the plaintiff or that he otherwise breached his fiduciary duties including those of loyalty during the course of his employ.

"Nor was there any evidence tending to establish that the defendants are subject to liability due to their engagement in wrongful conduct following the Blaszczynski's departure. The moving papers failed include proof of the existence of facts tending to establish that the defendants' misappropriated and/or misused confidential information or trade secrets belonging to plaintiff. In this regard, the court notes that no customer lists, contact lists or contract accounts have been shown to be trade secrets as there is ample proof that they are readily ascertainable from non-confidential sources. Moreover, the record contains undisputed evidence that the plaintiff took few, if any, precautionary measures to preserve any exclusive knowledge of pricing, contact or customer lists by limiting legitimate access thereto by defendant Blaszczynski or by securing his agreement to a restrictive covenant or other non-compete agreement."(Emphasis supplied).

In other words, the plaintiff, in this instance, failed to satisfy any of the threshold legal criteria needed for a court to award injuntive relief, which is commonly known by its shorthand mnemonic, a "TRO," or Temporary Restraining Order.

Assuming Justice Whelan's recitation of the facts is accurate, you have to wonder what the plaintiff was thinking when they filed the application for the TRO; indeed, it seems that even had the defendants not opposed the application, the Court would have been obliged to deny their request.