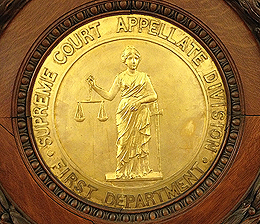 In a stunning reversal of the New York County Commercial Division's trial court, on May 26, 2022, NY's Appellate Division, First Department issued a  temporary restraining order (or, in the colloquial legalese, "TRO"), enforcing a noncompete on a former executive, and barring him from working for a competitor for the next eight (8) months in the case of Excel Sports Management v. Eways.

What the Appellate Division Held

After noting that the trial court had denied the plaintiff and former employer's application for a preliminary injunction barring its former employee Eways from working for one of its competitors (and co-defendant), Klutch Sports Group, LLC, the Appellate Division went in the opposite direction, stating, in pertinent part, as follows:

"It is ordered that the motion is granted to the extent that a preliminary appellate injunction is granted prohibiting defendant Eways from working for defendant Klutch Sports Group LLC, and defendant Klutch Sports Group, LLC from employing defendant Eways ... pending the hearing and determination of the appeal or October 15, 2022 (eight months from the date of Eways’ February 15, 2022 resignation), whichever occurs first, on condition the appeal is perfected for the September 2022 Term."

The Practical, Albeit Not Immediately Obvious, Effect of the Appellate Division's Order

At first blush, this might seem like a mere placeholder until the appeal is heard. But ask anyone familiar with the turnaround time at the appellate courts right now, they would confirm that there is virtually no chance that this appeal would be heard in the next 8 months. In fact, the current wait time in the Appellate Division, First Department is probably twice that. Therefore, unless the Court of Appeals agrees to hear the defendants' application to vacate the Appellate Division's May 26 Order (which is certainly an uphill fight), it appears that the plaintiff will have effectively won this aspect of their case, without affording the defendants a further opportunity to fire another shot.

Why The Appellate Court's Ruling is So Surprising

Generally speaking, when it comes to decisions regarding the issuance or denial of preliminary injunctive relief, trial courts are accorded wide discretion, which means even if they're mistaken, appellate courts will almost always defer to the trial court's ruling on these issues, particularly given that the trial courts are "in the trenches," and presumably best able to assess the weight of the evidence on these applications. Moreover, in this particular instance, the trial court precluded certain evidence that the plaintiff had principally based its motion on because it wasn't submitted in a timely fashion, which weakened plaintiff's application even further. When combining those factors with New York's general disfavor for strictly enforcing non-competes - as opposed to non-solicit provisions, the Appellate Division's reversal of the trial court's denial of Excel's application for a preliminary injunction is certainly surprising, to say the least.