Recently, the father of a 14 year-old boy who died sued a New York school district, claiming that the district was liable for his son's death that occurred when he fell during warmups for cross-country track championships against a rival school.

More specifically, it appears that the teen went into cardiac arrest when he fell hard on his chest after slipping on the track.

Ordinarily, it would be hard to prove a negligence case based on a slip and fall on a track.

But here's the wrinkle to this particular story:

The father contends that if the district had the mandated defibrillator (AED) on hand, his son wouldn't have died. 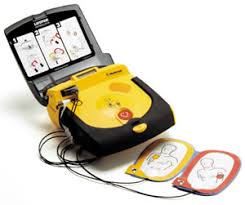 I think that this lawsuit will be particularly challenging to win, even assuming this boy's father has the requisite experts to back up his claims; I think that such experts - if they're honest - will probably have to concede the strong possibility that this boy would have died even if a defibrillator had been available.