When Cases Degenerate to Throw at the Wall & See What'll Stick 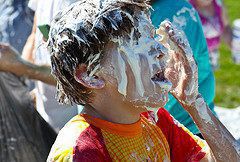 Just last week, I concluded a trial out on Long Island in a relatively straightforward breach of contract matter. Over the course of the past 2-1/2 years of litigation, my adversary and I usually got along OK - albeit not great - on a personal level. Admittedly, there have been a number of times I was less than gracious, or patient with him, though. This tension was typically exacerbated when we reached any sensitive points of the case, because I had a drastically different view of the case than he, and never really understood why he was litigating the case in the way he was.

To be clear, I fully appreciate that everyone has a client to represent, and to do so vigorously. It's just that I couldn't - and still can't - see the rationale for his tactics.

Case in point: Earlier this year, my client had to submit to a deposition, which, for the uninitiated means that my adversary was afforded an opportunity to question my client under oath about the particulars of his claims. In this instance, the Court had previously ruled against the defendant following a trial on a limited issue, and held that there was indeed a valid agreement between the two sides, which meant that the only real remaining issue in the case was the degree of damages suffered by my client as a result of the defendant's breach of the agreement.

Typically, one would assume that once the issues remaining for trial had been limited to that extent, the deposition would take no more than 1-2 hours, particularly given that we were only talking about 5 years' worth of tax returns.

My adversary deposed my client for seven (7) full hours.

And, it turns out that this was just a foretaste of what trial was going to be like.

I had my client on the stand, and questioned him for roughly 15 minutes. My adversary cross-examined him for approximately 4 hours. On top of that, he subpoenaed my client's parents to testify - knowing full well that they had nothing to do with the daily running of my client's business. And then, after they traveled roughly 50 miles to court, and ambled in with their walker and cane that they needed to walk - he didn't bother calling them to the stand!

Concededly, I had trouble keeping up with his closing arguments; in nearly 19 years of practice, I haven't seen so many arguments raised for the first time at the close of the trial, and - even worse - betrayed a complete misunderstanding of the applicable law.

He was throwing everything he could muster at the wall, and hoping something will stick.

Why I Think That's the Wrong Way to Go

We're still waiting with bated breath for the Court's final determination. He may yet prevail, and the possibility remains that his tactics may have worked.

I can't/won't litigate that way, though.

It's definitely not me or my style; I remain of the belief that arguing this way causes you to lose credibility before the Court, and dilutes the power of the legitimate, stronger arguments favoring your position.

To each his/her own.