Why Senior Executives Are Often Immune from Deposition in New York 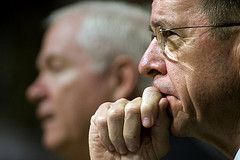 When you sue a large corporation for a wrong they visited upon - no matter how legitimate your gripe may be - it doesn't necessarily entitle you to depose the CEO, or some other high-ranking corporate officer.

Some of New York's Federal courts have articulated this rule as follows:

The rationale for this rule is relatively straightforward:

"[P]ermitting unfettered discovery of corporate executives would threaten disruption of their business and could serve as a potent tool for harassment in litigation."

That said, this rule is not without exception, such as where the high-level executive has independent knowledge of the issues involved in the litigation. Under those circumstances, the courts have followed the broader doctrine favoring wide latitude in the discovery phase of litigation.

There is one other thing to bear in mind here, particularly if you are involved in a commercial litigation before New York's courts. As of April 1, 2015, New York's Commercial Division adopted Rule 11-d, which is modeled after the rules governing Federal court actions, and limits the number of depositions afforded to each side of the litigation, and also limits the amount of time allowed for each deposition.

More specifically, the general rule is if you seek the deposition of a corporate entity, you will be limited to 7 hours' worth of total testimony from that entity, regardless of how many witnesses you depose during that time. Absent special permission from the Court (or the other side's agreement), the only other way to secure more than 7 hours' testimony from a corporation would be if the witness you seek to depose has independent, personal knowledge of the facts in your case.

At the risk of stating the obvious, the takeaway for litigants is this: choose your witnesses, and the amount of time you spend on each witness, wisely.