The Definitive Insider's Guide to Non-Compete Agreements in New York 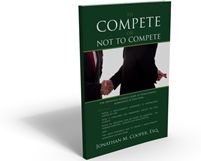 If you've been following the news lately, you  may have seen what an active role New York's Attorney General (among others) has taken in terms of trying to curtail employers' ability to enforce non-compete agreements.

The rules on non-competes, across the country, and including New York, appear to be changing, or at least evolving, on a near-constant basis.

Of course, you could choose not to consult an attorney - and save a little bit of money - before acting with respect to the non-compete. But for the savings of perhaps $1,500 for the consultation, you are putting hundreds of thousands of dollars in potential damages - or more - at stake.

To learn more about non-compete agreements in New York, get a copy of our valuable and Free Guide.

Get the FREE eBook Here