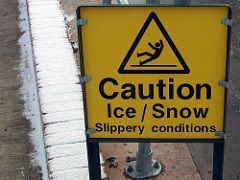 Yes, it's true; most slip and fall cases - despite what you may have been told - will end up being dismissed.

In order to understand why, though, it requires reviewing what a property owner's responsibilities are in terms of liability for the personal injuries sustained by people who may have slipped and fallen on their property.

By way of background, here are a few primary principles governing negligence:

Why Most Slip and Fall Cases Fail These Tests (& Therefore Lose)

There is an important caveat here, which is why it is often quite difficult to prevail on a personal injury claim that arises from a slip or trip and fall over snow and ice:

The defendant property owner cannot be held liable unless a reasonable amount of time has passed from the cessation of the storm.

In other words, as long as either rain or snow is still falling, and for a significant period of time thereafter, no property owner can be held negligent for failing to clear their property of the snow or ice.

GET YOUR FREE COPY
"Why Most Accident Victims Do Not Recover the Full Value of Their Claim" is intended to help New Yorkers assure that they avoid some 10 simple mistakes that will almost certainly reduce the value of their accident claim, whether it results from a construction site accident, a car accident, motorcycle or bicycle accident, or even a trip and fall over a defective or cracked sidewalk.
The book addresses important topics including what you need to prove to win your accident case, and identifies some of the most common pitfalls to these cases. Click on the link above to get your FREE eBook on New York accident cases. Contact Long Island, New York accident attorney Jonathan Cooper at 516.791.5700 for a FREE consultation regarding your negligence case. There is no obligation to hire a lawyer.  There is no fee until personal injury lawyer Jonathan Cooper successfully recovers fair compensation for you.